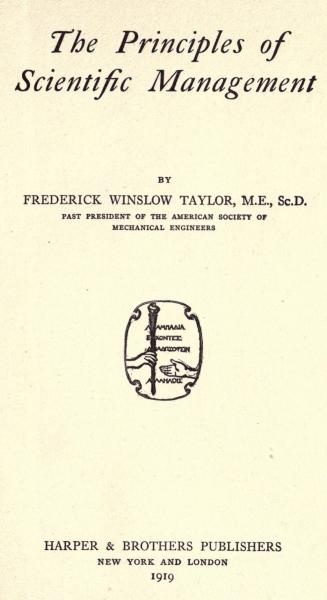 During the early twentieth century, a mechanical engineer named Frederick Taylor devised an innovative management system that was based on applied engineering principles and the scientific method to optimize industrial labor productivity. Taylor’s book, The Principles of Scientific Management, described four core principles that formed the basis of his scientific management approach:

“First. They develop a science for each element of a man's work, which replaces the old rule-of-thumb method. Second. They scientifically select and then train, teach, and develop the workman, whereas in the past he chose his own work and trained himself as best he could. Third. They heartily cooperate with the men so as to ensure all of the work being done in accordance with the principles of the science which has been developed. Fourth. There is an almost equal division of the work and the responsibility between the management and the workmen. The management take over all work for which they are better fitted than the workmen, while in the past almost all of the work and the greater part of the responsibility were thrown upon the men,” (Taylor, 1911, 36-37).

Frank and Lilith Gilbreth expanded upon Taylor’s work by developing the “time and motion study,” a systematic approach to analyzing and eliminating unnecessary motions associated with the completion of work tasks (Meister, David 1999). Similar to Taylor’s work, the time and motion study provided organizations with a simple, repeatable methodology for reducing work to only the most productive components. Ultimately, the improvements in efficiency resulting from Taylor and the Gilbreths’ work led many to adopt their philosophies and reconsider common work practices.

The rapid advancement of large weapons that required increased cognitive workload on the behalf of operators during World War II led to the advent of contemporary ergonomics as we know it today. Specifically, a curious sequence of runway crashes involving B-17 bombers led the Army to assign a talented Army psychologist, Alphonse Chapanis, to conduct a series of studies to determine the root cause of the incidents that were often incorrectly attributed to “pilot error.” Chapanis discovered that the incidents were the result of poor cockpit design.  Fatigued pilots were confusing the wing flap controls with that of the landing gear, causing the pilots to crash when attempting to land. Chapanis’s solution was simple, but novel - use a wheel shape on the landing control and a flap shape on the flap control so that pilots could easily differentiate the two by touch alone (Meister, David, 1999). Chapanis’s recognition that modifying the design of the cockpit rather than expecting the human to not make mistakes, particularly when tired or engaged in demanding activities, represented a critical change in systems design. The military responded by establishing several “human factors” labs in order to better understand how humans interact with their work environment (Human Factors and Ergonomics Society, 1994-2013). Today, Alphonse Chapanis is considered the “Father of Human Factors” and the multidisciplinary profession he helped establish has grown substantially.  For more information on the professional societies that many human factors and ergonomics professionals belong, please see Appendix A.